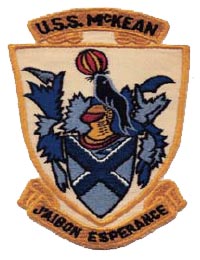 USS McKean (DD-784) was christened in honor of Commodore William Wister McKean, and is the seccind ship of the fleet to bear this name. Commodore McKean was born in Huntington County, Pennsylvania, in 1800. He was the grandson of Thomas McKean, who was one of three delegates from the colony of Delaware and a signer of the Declaration of Independence. Thomas McKean was also a Governor of Delaware and a Chief Justice of Pennsylvania, and is believed to be the namesake of McKean County in western Pennsylvania.  In 1814, young William McKean was appointed Midshipman in the Navy. During his long and varied naval career, he rendered valuable service suppressing piracy with Commodore David Porter’s Squadron in the West Indies, and was a Lieutenant on the DALE during the Mexican War. Commodore McKean was once the head of the Navy’s training school, then called Naval Asylum, and subsequently was a member of the board of three persons who selected the site of the Naval Academy at Annapolis. In 1859, Commodore McKean was in command of the expedition which returned the first Japanese Embassy to this country back to Japan, aboard the flagship NIAGRA. On his return from Japan, he learned from a passing vessel of the outbreak of the Civil War and, gathering his crew, pledged them all to allegiance to the Union. During the Civil War, he was in charge of what developed into the Gulf Campaign, which was ultimately executed by his successor Admiral Farragut.

Commodore McKean died in 1865, three years after his appointment to Commodore. At the time of his death, he was a member of the Naval Board.