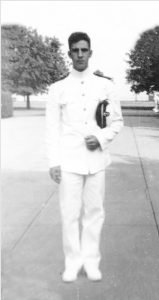 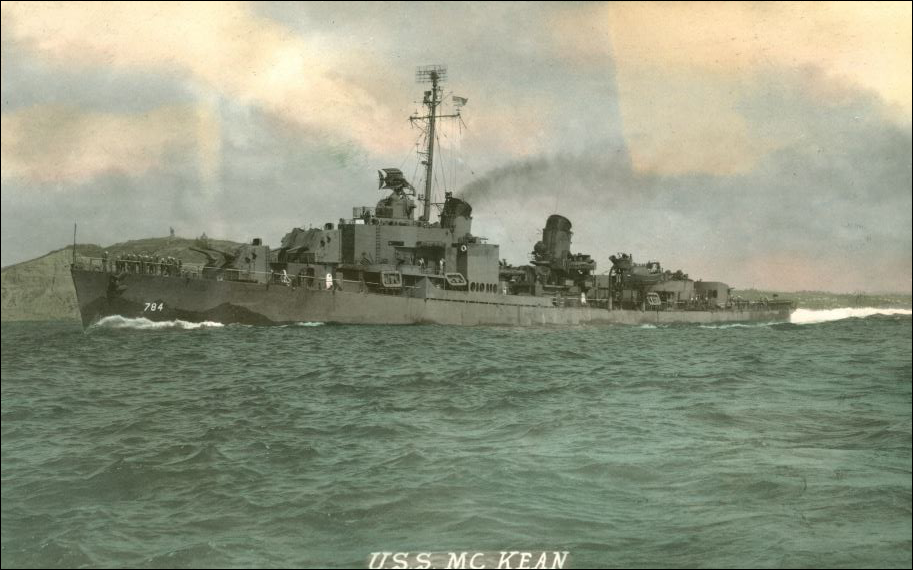 This is a voice recording of Douglass Owen Nicholson a SOM 2c on the USS Reynolds Destroyer Escort (DE) and my father, Delta Wayne Smyth, LTJG, engineering officer on the USS McKean DD784 on its maiden voyage to the Pacific between Okinawa and Honju for cleanup duty as part of the occupation force in the pacific. Owen is talking in the beginning and father was listening to his story. Owen is the one doing most of the talking. Owen has written a book based on his sea diary that he kept during his time in the war on the USS Reynolds.

When Wayne completed his engineering courses at the University of Washington, the Navy sent him to Princeton to be evaluated for further training and placement.  He scored high on their tests, so the Navy sent him to the U.S. Naval Academy at Annapolis to train as an officer.  Because he and his fellow midshipmen had already completed so many college-level courses, their education was far beyond what most of the academy students had yet achieved.  These midshipmen were almost like graduate students in comparison to the other young men at the academy who were fresh out of high school.  The Navy set up a special program at the academy to fast track these engineering students so they could get out onto the ships as quickly as possible.  Since Wayne and his classmates had already completed their college-level engineering classes, the training went smoothly.

“We already knew something about boilers by then, and I had personal experience from the steam engines I built back home.”  After completing his training at the Academy, the Navy sent Wayne to sea.

USS MCKEAN. Wayne was assigned to the USS McKean.  The McKean was commissioned in 1945, and Wayne served on its maiden voyage.  It was a two-stacker and it had torpedo tubes up on the deck by the stacks.  Originally, it had two sets of tubes, but they took one set off because it made the ship unstable.

“We went through some storms that I wouldn’t have survived if they hadn’t taken those tubes off.  I was down in the engine room.”

The McKean was a member of Destroyer Division 131 and part of the massive naval fleet sent to invade Japan.  The United States dropped the atom bomb on Okinawa just as Wayne was leaving Annapolis. Of course, the bomb achieved the desired goal of forcing Japan to surrender, but the Navy opted to send the invasion fleet anyway. The USS McKean arrived in Japan in the fall of 1945 and was assigned the task of “bird dog” duty.  This involved sailing from island to island in the archipelago between Okinawa and Honshu (the main island of Japan), cleaning out enclaves of Japanese soldiers who weren’t yet aware that Japan had surrendered.

“I was damn lucky I got there just at the end when the atom bomb worked!”

Soon enough, Wayne completed his tour of duty with the Navy and returned to the University of Washington to complete his degree.  He already had plenty of credits to graduate, but they were all in engineering – the only subject the Navy wanted him to study.  He hadn’t had a chance to take all the other electives required for graduation.  By the time he did graduate, Wayne had 250 credit hours under his belt, about 70 credits more than required for graduation.